To make great lagers, you need cold temperatures. Years ago in Forchheim, a town in Upper Franconia, almost exactly between Bamberg and Nuremberg, brewers dug cellars into the nearby soft sandstone hills to mature their beer, meaning they’d brew in the town and transfer the beer to age in the cellars, before taking it back to town to drink. But one day someone realized that the beer was cold in the cellars, but lost its refreshing coolness on arriving in town, which didn’t make much sense. So they decided to go to the hills and drink in the shaded gardens around the cellars. They probably didn’t expect that centuries later people would still be drinking there in what is now called “the world’s largest beer garden.”

Today the Kellerwald has 24 kellers, or “cellars,” within 820ft (250m) of each other. Most of the cellars date back to the 18th century, but the oldest is from 1609. The underground spaces still exist, but it’s the areas above ground that attract people to drink there. A handful of beer gardens and bars are open all year round, serving local beers (though there are far fewer open in the winter). However, every year, for a 10-11 day period centered on July 26th, they all open for Forchheim’s Annafest, with 600,000 people visiting. (Good fact: there are 32,000 seats at Annafest, which is also the same number as the population of Forchheim.)

Annafest is a huge folk festival where every bar serves an Annafestbier —a strong, pale lager similar(ish) to Oktoberfestbier. There’s music, food, and lots of fun, all in this unique environment on a hill above Forchheim surrounded by trees and above a network of beer cellars. Think of it as a small Oktoberfest and definitely one of the world’s best drinking festivals.

But don’t just go to Forchheim for Annafest… Forchheim has four breweries: Greif, Hebendanz, Eichhorn, and Neder. They all have restaurants or bars, although the opening hours can be a little unusual (sometimes closing from 2pm, even on a weekend). The Kellerwald is always open, especially in the summer, but it’s best to check opening times first. Another fun fact: in Forchheim, they are able to say that they go up to the cellars to drink beer, as they’re cut into the hills above the town—though this also means, of course, that they have to walk uphill to get there.

The breweries make a range of beers, but they often only have one on tap. At Greif that’s a bright, golden Helles, while in Neder it’s an Export, which is pale and rich with malt and spicy hops. They all typically have a fuller malt flavor than the beers of Munich, something more bready, or more amber in color, and then also more bitter— something generally characteristic of Franconian beer.

Why Annafest? The name comes from Saint Anna, Jesus’s grandmother. The Church of St Anna is near Forchheim and on July 26th, the day of St Anna, people would make a pilgrimage to the church, stopping for beer in Forchheim on the way. The first version of Annafest was held in 1840. You can read more about Annafest here: www. annafe st-forchheim. de.

• This is a part of the world where breweries often serve beer in krugs or steinkrugs (meaning “stone mugs”). But if you can’t see how much beer is left, then how do the bar staff know if you need another one or not?

• If you have a krug with a metal lid, then leaving the lid open means that you want another beer; if you leave the lid closed, then the barman will know you’re still drinking.

• If you don’t have a lid, then when you want another beer you need to lay your empty krug on its side. If you want a small beer—or schnitt, which is basically the half you have when you’re leaving—then you need to try and balance the mug on its handle.

• And if you’re ready to leave, then place your beer mat on top of your mug.

As well as being famous for beer, Forchheim is filled with historical gems and several buildings date back to the 14th century and beyond. 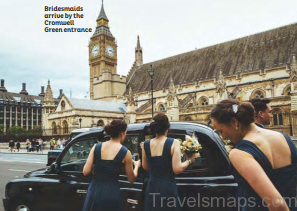 Most Beautiful Wedding Destination in the World