Home
Blog
Getting Around Paris

Paris meets the countryside in a dozen sleazy ways, all around the compass. What the French call ‘terrains vagues ’ are indeed vague, changing rapidly as motorways and geometrical patterns of flats eat up the landscape. Meanwhile you will find a field of cabbages, some shack towns and grey unbeautiful centres, like Asnieres, of great character. Haunting character almost everywhere, Simenon-like, moved out of central Paris as those who prefer appearance to reality move in. Oh yes, and Versailles; an engaging country town caught up with the world’s best-known exposition, carried on over a century and a quarter, of how to prefer appearance to reality. It ended, as it had to, in the guillotine.

NORTH-WEST, DOWN THE SEINE

The riversides of central Paris are familiar. But who knows the set that runs from Boulogne-Billancourt to Saint-Denis along the city’s backside, formed by one of the vast loops in the Seine? Industrial from end to end, grey even in sunlight, yet with colossal scale: the banks lined with trees, the Seine full of tree-filled islands in haunting combination with the factory chimneys. Perhaps better on the west side, with less traffic: a journey past or under innumerable concise iron bridges of half a century ago – the underside of the Pont de Levallois has a Piranesian network of steps. Past Asnieres, where the spindly chimneys that appear in Seurat’s La Baignade are still there, though not much bathing goes on now; past the brittle unreality of the new blocks at Puteaux. The Impressionists might have enjoyed its present transformation just as much, all quarter-tones and atmosphere.

Getting Around Paris Photo Gallery


Where To Go In Paris Ile de la Jatte

An island in the middle of the Seine immediately north of the Pont de Neuilly: like the eyots in the Thames but bigger and leafier. It carries a tearful rotunda as a reminder of quieter days; seen from the eastern side this is thrown against the new office blocks to provide one of the neatest contrasts in Paris. Add to that the further contrast of the new curtain-walls and the dying fragments of old Courbevoie, and this becomes urban wit of a kind which is fairly common in London and fairly rare in Paris just because that city has been more careful with the scale of its rebuilding. It would be a winner in either.

If the plans mature, this, in twenty years’ time, will be a westward extension of the Champs-Elysees: it is the starting point for the exhilarating drive down to the Pont de Neuilly and then up to the Arc de Triomphe. There will be underground roads and all kinds of goodies. At the moment, naturally, there is nothing like this: a large roundabout, a curtainwalled slab that could be anywhere and the colossal exhibition hall of the Centre National des Industries et des Techniques. This is

Olympia, Earls Court and the Westminster Horticultural Hall rolled into one, and there is always something going on there. The outside is as graceless as the backside of a cathedral chevet: a vast three-cornered hat, the points of the roof resting on the ground, the sides filled with glass and boxed-out entrances. But inside, it all makes sense: three pleated concrete vaults rise from the corners to meet in a tripod. This symmetry, and the rhythm of the pleats, topples your personal gyroscope. You really have to count to make sure that there are not four corners – or five, or eight. One particular corner remains legible; the total number dissolves. Hence every exhibition can seem infinite.

Built in the thirties, it looks dated enough from the outside, though honest. But the inside is a vast concrete hangar, and the teeming market life does the rest. To be listened to as much as looked at: the stallholders shout their wares like the street criers of Old London, and the tall parabolic roofs are well-equipped to reflect this harsh but harmonious sound: a kind of Gregorian chant of the third estate. Asnieres is an epitome of the kind of Paris that the visitor seldom sees; I suppose the London equivalent would be Tottenham or Willesden.

(29 avenue des Gresillons, a little east of the centre, towards Saint-Denis.) 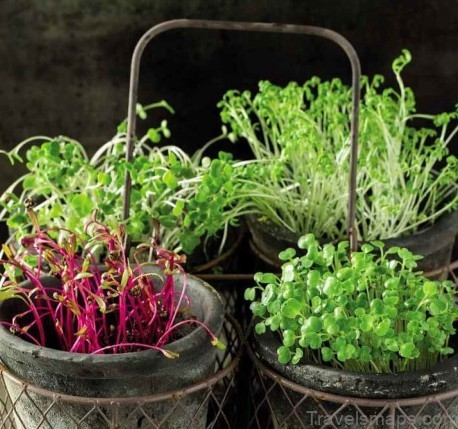