Well named. It has a distinctly raffish air – Saint Mary M. before the conversion, rather than after. Lady and gentleman saints gesture with brazen ferocity and a Last Judgement is going on in the end pediment secure in the knowledge that the curtain is about to fall on Act Three. This lush Roman temple has indeed had its theatrical ups and downs. Napoleon intended it to glorify his armies – an inscription outside says grimly that it was ‘rendue a sa destination primitive en 1816’. Inside, the serious purpose of the place unfolds: three saucer domes, top-lit, followed by an apse, the sides lined with pedimented constructions of the uttermost richness. All this has worldly, pagan dignity of a high order: an inflated phrase, but the Madeleine makes you write like that. And it is also cram-full of human aspiration – to the Beyond, if not to the Only God resident in Rome. With Notre-Dame austere in an austere style, and with so many Parisian buildings uniting inhumanity with classical perfection, a whole city’s hunger is distilled here – a combination of St Paul’s and St Martin-in-the-Fields.

(If the west doors are open, walk to the altar and turn round. The view is a permanent vote for La Gloire: light streaming in, an obelisk backed by the Palais Bourbon and the dome of the Invalides nudging in on one side.)

Quite rightly just l’Opera, not a name like Covent Garden or La Scala. This is the final justification of the gilded acres of Versailles and Fontainebleau: a declamatory roulade of allegory that would pump a sense of occasion into the limpest libretto. The outside gives clear warning of what is about to happen, but it is only tuning up; overture, grand march, love duet, and final chorus are all inside, in the gorgeous sequence of double staircase leading to the auditorium on one side and a third-floor foyer – what a name for it! – on the other, immediately behind the facade. This is more operatic than the opera, pulling the audience willy-nilly into grandeur. There is no longer a cast and spectators, there are various persons assisting at a rite, some singing and some listening. To hear Offenbach in these surroundings must be unforgettable. La Belle Helene is the building, just as Messiah is the Albert Hall. The Opera has consumed itself – when you buy a programme, you get as it were a sliver of goddess – and architecture has no higher function. Pay any price and go and see anything, however unsuitable: the experience will be worth it.

(A postscript on Chagall’s new ceiling to the auditorium It succeeds, especially with the lights dimmed, as the kind of romantic desire that becomes everyone’s property in the heightened tension of an opera. But it is sustained only by the force of the architecture around it: a plaintive flute where trumpets were needed. One man could have done it exactly; but Edouard Manet never got the chance.)

The boulevard leads eastwards from the Place de l’Opera, and looks much like all the others. Long straight streets intersect it, much like all the others – until the rue Laffitte, at the far end. This is long and straight, the end well filled by the handsome classicism of Notre-Dame-de-Lorette. But behind it, the view goes crazy: perspective stands on end and the Sacre-Creur appears gesticulating madly on top of a green slope. The unreality could not be greater if the whole thing was a painted backcloth: a wild huzzah in the middle of all the rational bourgeois comforts.

This is the Madame Tussaud’s of Paris, with the waxworks less competent but the involvement much greater. Afer some time it is very difficult to see which of the packed crowd – this is no place to go if you have claustrophobia – is real and which is image. The formal tableaux are arranged around a hall of sluggish magnificence, a cross between the Opera and the Black Friar in London. Decoration is drugged with wax, the wax solidifies, or tries to, around the hubbub of visitors. As well as this, all included, are two spectacles: le Palais des Mirages, all done with six rotating columns and a lot of mirrors – ‘le temple de Brahma – la foret enchantee – une fete a l’Alhambra’ – and le Cabinet Fantastique, where a long-established juggler performs well in eighteenth-century costume to eighteenth-century music in a delightful small theatre of 1900. The layers of satire or conjuring are realized all at once like a chord: it is up to you to pick out the various notes. Altogether, it is one of the most surprising yet typical experiences in Paris, like the Vincennes Zoo or the Eiffel Tower. All yours for about eight bob, which is what a Scotch is likely to cost hereabouts. 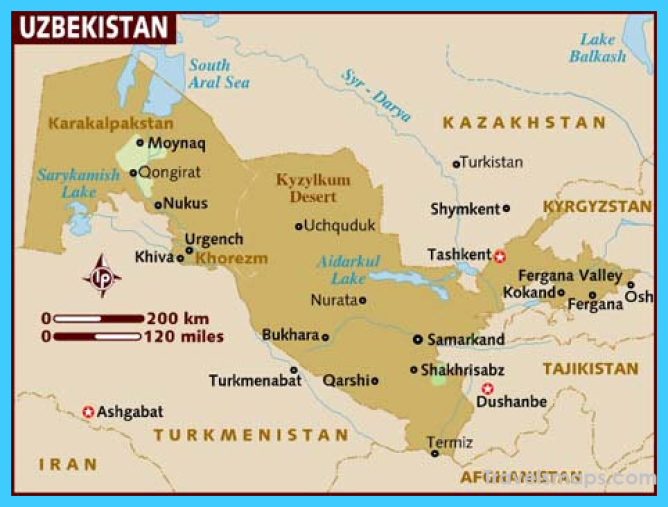