I haven’t completed my Beer Bucket List—if anything, the list is growing longer—and there are still many great American places that are high up on my to-do list. Here are some of them.

* One day I want to walk down to the beachfront and go to Pelican Brewery Company (33180 Cape Kiwanda Drive, Pacific City, Oregon 97135). I’ll order a pint and sit with one of beer’s best views: a view over the Pacific Ocean and out to Haystack Rock. It’s one of those places that you can almost feel, smell, and taste when you look at the pictures. A place with a majestic, magnetic pull; a pilgrimage pint to drink by the sea at sunset.

* De Garde Brewing (6000 Blimp Boulevard, Tillamook, Oregon 97141) let nature choose their brewery location in Tillamook, Oregon, west of Portland. Specializing in wild and spontaneous fermentation, yeast is very important to them, so, when they were working out the best location for their brewery, they placed wort along the cool Oregon coast, analyzed their fermentations, and discovered that the best came from Tillamook. Their beer ferments in coolships and is then transferred to wooden barrels, where it stays for between three months and three or more years. Their beers are almost exclusively sold in the taproom, which is clearly the best place to go to drink them. It’s stories such as this, and breweries like this, which are progressing craft beer in new directions; it’s single-minded and dedicated to specific styles and processes, and these places currently appeal to me the most. It’s the next development of American craft brewing.

* Scratch Brewing Company (264 Thompson Road, Ava, Illinois 62907) is a brewery and farm, and their focus appeals to me in a similar way to De Garde’s. They brew an ever-rotating range of beers using homegrown and foraged ingredients, including flowers, tree barks and saps, roots, mushrooms, and fruits, which change according to the season and availability—they also have a couple of people specializing as farmers and foragers, working between the brewery and the kitchen. Food is sourced locally and includes house-baked bread and pizza. And you can drink the beers sitting in the forest, which is like their own walk-in grocery store. There aren’t many—or any—other breweries like Scratch that source ingredients so widely from their land. The brewery is open Thursday to Sunday, but check ahead for opening times.

* New Glarus Brewing Co. (2400 State Highway 69, New Glarus, Wisconsin 53574). If you’ve had their fruit beers, then you’ll know why I want to go, but I also just want to have a pint of Spotted Cow, their Wisconsin farmhouse ale that’s brewed with Wisconsin malts. * Suarez Family Brewery (2278 U.S. 9, Hudson, New York 12534), in rural Livingston, has the kind of focus that gets my attention: clean and long-fermented unfiltered lagers; mixed-fermentation, farmhouse-style ales; and “crispy little beers” that are bright, light, lively, and fresh. Every photo that I’ve seen of their beers has made me immediately want to drink them—having a glass of their lager at the brewery is right at the top of my “I-want-to-drink-that-right-now” list.

* Spencer Brewery (167 N Spencer Road, Massachusetts 01562) is American’s only Trappist monastery that makes beers. You can’t visit the brewery (although you can visit the abbey) and that makes me want to go even more.

* Fat Head’s Brewery, Cleveland (24581 Lorain Road, North Olmsted, Ohio 44070). I’ve been to their brewery in Portland, Oregon (which is now closed), and the beers were amazing, especially Head Hunter IPA. But I want to go to the original brewery in Cleveland, just to sit there and drink too much of their beer. While in Cleveland I’ll also go to Great Lakes Brewing (2516 Market Ave, Cleveland, Ohio 44113) because I really like their beers—they make excellent lagers and their Porter is in the upper tier of world Porters (www. greatlakesbrewinff.com).

* Then there are the two couldn’t-be-more-different, noncontiguous states of Alaska and Hawaii. Both have loads of beer and amazing sights to see. To drink the Smoked Porter at the Alaskan Brewing Company (5429 Shaune Drive, Juneau, Alaska 99801) is a must-do beer thing for me. There’s the Great Alaska Beer and Barley Wine festival held in January in Anchorage (perhaps the only reason to go to Alaska in January), which is also where you can drink at Anchorage Brewing Company, Midnight Sun, and Broken Tooth. In Hawaii, you’re drinking good beer in paradise. All the main islands have breweries and they all seem to brew American styles, with many having a local twist, such as adding fruit or coconut. Maui Brewing Co. (605 Lipoa Parkway, Kihei,

Maui, Hawaii 96753) and Kona Brewing Co. (Pawai PI, Kailua-Kona, Hawaii 96740) are the best known and there’s a lot more to go with them. An Hawaii island-hopping beer tour sounds like a decent vacation to me.

* And I think drinking a local beer in each American state should definitely be on the Beer Bucket List.

A brewery in Hawaii, that’s about all you need to know as to why the Kona brewery is on the list. 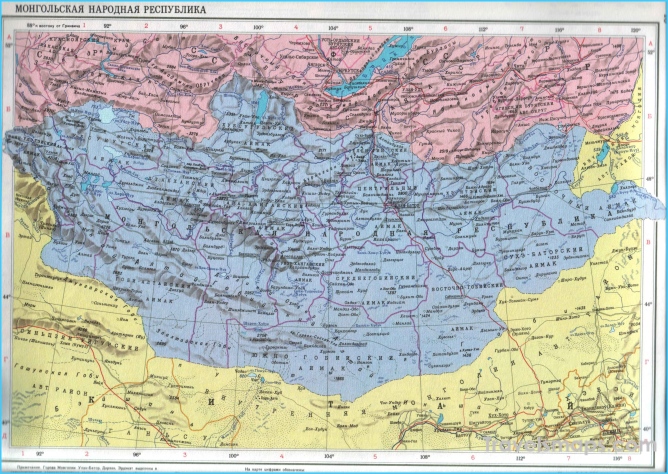 Where is Mongolia? | Mongolia Map | Map of Mongolia