Metro is very important for New Yorkers If you plan to go to New York, you will need Metro maps, you can download the most detailed New York Subway maps for free from the gallery below.

We will present a list of places that are accessible by subway in New York.

Here we go to the fun activities you can find in New York.

The appeal of the super heroes is unmistakable. The costumed defenders of the free world are enjoying a renaissance. Comic sales have reached an all-time high, the movies continue to set records, and Comic-Con is one of the hottest tickets in US.

The most success full franchise is Spiderman which is estimated to be worth about $1.3 billion annually, placing him far ahead of the rest of the Marvel Universe and relegating D.C’s Superman and Batman to less than heroic status. Your friendly neighborhood Spiderman can be found on T-shirts, hoodies, coffee-mugs, smartphone cases, and even brings his exploits to a Spiderman online slot game.

Since Marvel movies such as Spiderman are set in real-world locations there is even another industry that benefits from the web-slingers popularity; tourism.

True believers, comic fans, and self-proclaimed movie geeks can been seen on a daily basis taking selfies and sometimes elaborately staged photos at some of the locations used in Amazing Spiderman and Amazing Spiderman 2.

The 108-story Oscorp headquarters is a digital creation, but the lobby and the entrance are very real. They are part of the Hearst Tower, 300 West 57th Street. The Tower itself actually looks like something from a comic. The building is fairly typical of the stone buildings of the late 1920’s. However, the 46-story glass tower that was added later makes the building something of an oddity.

Peter Parker’s home is with Aunt May and Uncle Ben. Both films used the same house which is in near Prospect Park in Brooklyn; 36 Fuller Place to be exact.

Captain Stacy’s office is in a decidedly non-police like building, the New York branch of the National Museum of the American Indian . The building was formerly the Old Customs House and is located at 1 Bowling Green at Broadway. The building is somewhat of a star in its own right having made appearances in Ghostbusters II, Batman Forever, Working Girl and The Royal Tanenbaums.
The Stacy apartment

When not in the office, Captain Stacy, along with Gwen, relaxes at home. The apartment is at 15 West 81st Street. The building consists of luxury apartments complete with a lavish lobby done in an Italian renaissance style and a view of the Natural History Museum which are well out of the average police captain’s salary.

The Ravencroft Institute for the Criminally Insane

Super-villains require massive and forbidding looking structures to hold them. Once Electro is captured he is taken to the Ravencroft Institute for the Criminally Insane. Appropriately the real location is a former fort, Fort Schuyler. The fort is the Maritime Museum and part of SUNY Maritime Community College located at 6 Pennyfield Avenue in the Bronx.
Chinatown

Peter and Gwen’s breakup, which is prompted by Peter’s promise to Captain Stacy to never put Gwen in danger, takes place in Chinatown outside of Nom Wah Tea Parlor at 13 Doyers Street in Chinatown. The restaurant which has been is the same general location since 1920 is famous for their dim sum and has been a frequent location in Woody Allen movies.

While many of the street scenes are actually filmed in New York, more of them are filmed on sound stages in Culver City, California and many of the chase scenes were filmed in Rochester, NY since NYC ordinances prohibit filming chase scenes at speeds more than 30 mph.

Also don’t bother looking for the site of the funeral scene in the first movie as it is actually the Immanuel Presbyterian Church, 3300 Wilshire Boulevard in Los Angeles. 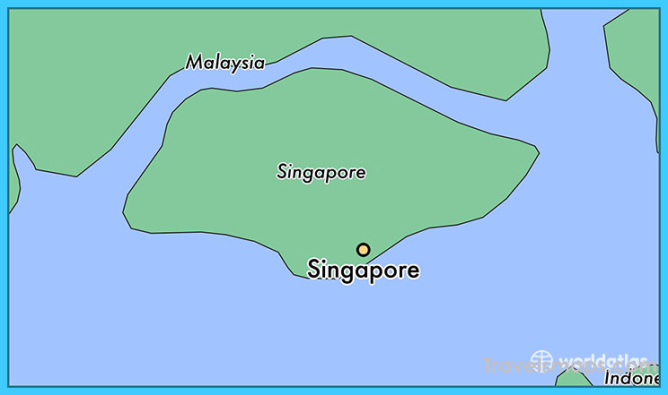