The name ‘Grand Canyon’ does not do it justice at all, I mean “Grand” is all well and good but this thing is something else. It makes anything you have ever looked at and thought was amazing seem mundane and quite simply average. Any other canyon should just be called ‘Not Even Close Canyon’. I felt like I needed more sets of eyes to take it all in, even now I don’t think I appreciated quite what I was looking at, it was…..well, it was just – WOW.

I can only implore you to go there now. Go, go now. Pack your bag and get out of the door and go. If you are bothered about money, save every penny you can and then go, take anyone and everyone you can with you and make sure they see it, there is nothing there that can disappoint you. If you want to see the best of it, go early, we arrived at about 8am, and there was hardly a car in the car park. There are not the words to do it justice, it really is incredible.

Coming away from the Grand Canyon the entire team was on a high. It was a brilliant start to the morning as we moved south again and back towards our original route. I was riding fast and strong, a new wave of adrenaline and hope rushed through my body, the smile could not be taken from my face. Pedalling and singing as I went, it was Epic. We passed an abundance of wildlife on the way including deer, elk, mountain lions and coyotes. Arizona just kept on giving. We pummelled our way down from the Grand Canyon. My legs were pumping furiously as I maintained the pace, often pushing from 35 to 40 miles per hour as we continued down towards our rest area of Kingman.


As I reached Kingman that evening I was once again empty, although the day had been exhilarating and exciting, the heat, altitude and pain had still been constant. You would be forgiven, whilst reading this, for thinking that I find pain pleasant or that some days were easy and they just passed by without ache or incident. This is simply not true – in fact, it could not be further from the truth. The truth is that every day hurt – a lot. Not like a little graze or cut which hurts for a second, this was bone-crunching, joint-pounding agony. On the way up to the Grand Canyon I had removed another toe nail, the pliers had come out and once again a toe nail was the victim If you have not a pulled a toe nail out of your own body before, don’t try it, it is excruciating.

I listen to people now, at work or in the gym talking about the pain they are in from a run or ride they have just done and I often wonder what their concept of pain is, what are they comparing it to? Pain is what you make of it, if you say the pain is 10 out of 10, then your mind will tell you that it is really bad, it is unbearable. With me I try and compare my current pain to pain that I have experienced before. I am almost always able to remember a time when I have felt worse and when I am able to do this, my current pain doesn’t seem that bad. I am sure this isn’t what other people do and this probably wouldn’t be recommended by experts, but it works for me.

Arizona had given me everything it could, climb after climb had come at me, ferocious heat had attacked me on a daily basis but as it tried to beat me to my knees it had also given me hope. What I had seen and experienced in Arizona could not be eclipsed by any negatives. As such, to Arizona all I can do now is say thank you.

I pressed out of Kingman in the early hours, joined once again by Kerry who stuck with me through my first 10 kilometres. It was a wet and dreary run, with drizzle hanging heavily over us as we tracked our way along the 66, parallel to the interstate. We plodded along still a little buoyed by the experiences of the previous day, a slight spring in our step during our slow run. The weather did what it could to dampen our spirits, as we passed over the interstate towards Oatman, the rain intensified.

Before arriving at the ‘Ghost Town’ Oatman, we had the slight issue of a range of mountains. I had been watching the mountains all morning as the road swung and snaked towards them, knowing that at some point I would be heading over them. Off in the distance about half way up the first mountain the road disappeared, it then reappeared much further up on the second mountain.

So far that morning I had run with all except one member of the team Kerry, Helen and Saj had all joined me at some point on the road. We had all sweated and plodded together. However, as the climbing really began, Darren was the unlucky support act. Darren joined me and we fell into perfect military timing, each foot landing at the same time. The sound of each foot hitting in unison became something to focus on, helping us to ignore the huge obstacle in front of us. We continued unerringly up the hill. We joked that maybe like some of the hills on the journey previously it might be merely an optical illusion and that when we got there it would in fact be quite flat, our jokes and smiles were short lived.

The ascent that had started off gradually but it had become steeper than any climb so far, contouring round the mountain, the bends continuing for miles into the distance, doubling back on themselves so that it wasn’t too steep for vehicles. “Never quit on a hill!” I screamed at myself, sweat flowing off my head as slugged my way up, step by step towards the summit. After 6 miles of climbing Darren had hit his limit, he had done his job, he had got me this far. As Darren found some sanctuary in the RV and got his breath back, Helen and Saj joined me again. This time we were going all the way to the top.

I love to see the look on people’s faces as they pass me while I run, especially somewhere as remote as mountains. On this occasion, we were miles from anywhere, we had been running for 30 miles already and we were not quite at the top. Yet, as they passed and tooted their horns, even cheered sometimes, I smiled, I wanted them to know that I could do this, that this climb would not beat me. As I hit the top, and like many times during this adventure I was hit with an overwhelming sense of euphoria. I had done it – not just I – we had done it, we had conquered that mountain.

We descended into Oatman shortly afer lunch time. Oatman is described in tourist leaflets as a ‘Ghost Town’, so we were a little surprised to see a town full of hustle and bustle and even more surprised to see, wild donkeys. We had seen so many abandoned towns along the way that this seemed quite odd to have the title of ‘Ghost Town’ when it was by far busier than the rest of the towns put together. Perhaps some of the other towns should be selling themselves in the same way and maybe then they would have thriving businesses. As for the donkeys, well, these by all accounts had been released into the wild when the town was emptied after the gold rush. They took to the land and have been living wild ever since. They walk up and down the road like any person would, completely oblivious to what’s going on around them.

Having done the touristy thing, and taken a few pictures, we pressed out of Oatman and towards California. Our rest area for the night was in a town called Needles. We passed the state line by going over a bridge that evening, right in the middle of the water we went from Arizona to California. It was obvious we were in California too, the landscape and the trees changed within just a few feet of the state line. Palm trees now lined the sides of the streets, slightly angled in to make it look like they were hugging the roads. The smell, the mountains and even the grass are just slightly different in California, it seems more relaxed, more laid back than the places we had been to previously. I was nearly there now, no more state lines to cross. 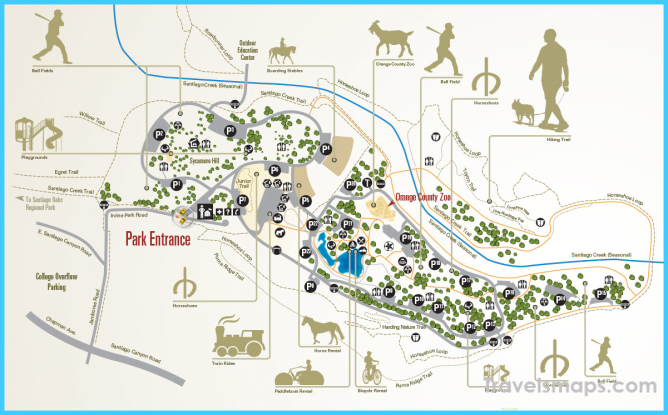 Where is Irvine? – Irvine Map – Map of Irvine

5 Best Places to Visit in Oakland