He came back Baton Rouge on an autumn morning. He was carrying a trench coat in his hands and he looked lost. My mother pushed us into each other’s arms. I was eight years old Baton Rouge and was meeting my father for the first time. I felt as if a father had been born to the child. We ended up not leaving. My mother came up with a thousand reasons, invented a thousand Baton Rouge excuses, dusted off many arguments to convince him that now it was better for us to stay put. I got to know my father on his many return Baton Rouge visits to our village.

Together we would make the rounds, delivering packages and cigarettes that his friends in Toronto had sent as gifts to their relatives. The wife of my godfather Franco, Angela, received an American trunk, green with metallic borders, filled with clothes, candies, cigarettes, and gingomme (chewing gum). To this day I can still see my father’s cartons of Camels on display in my parents’ bedroom; cigarettes to be gifted to friends and relatives. When I was older and started to smoke, Camels were the measuring stick of my life. I examined the package, and drowned my memories in it.

Canada made its entry into our villages with these small things: dollar bills, photographs brought over by returning emigrants. In the summer, the houses that had remained locked up during the long winter opened their doors once again. Feast days became livelier and more beautiful. Autumn celebrations were moved back into the summer months. From the early 1960s ancient agricultural fairs had metamorphosed into festivals celebrating the return of emigrants. The names of those who had returned for the summer months as well as of those who had sent offerings were called out from the stage: Emigrants had become the protagonists of the many processions. Canada came to visit with the returning emigrants who, armed with their cameras and 8mm movie cameras, captured what was left of their villages: the rubble, the faces and rituals that they would carry back to Toronto.

One day, after many years, Vincenzo made a return visit. We’d kept in touch by letter throughout this time. He’d sent money, dollars, so that I could buy him a movie camera. I’d imagined him in his high school in Toronto, and later as a young French teacher in Manitoba. He had come to the village after a short stay in Dijon and in Siena. He could hardly wait to get back. It was an evening of the mid-1970s. He couldn’t recognize anything; everything appeared smaller, everything had changed. From time to time he disappeared, and I would find him in front of his house, staring silently in deep thought, as though he expected some answer from the stones. Could this be the house in which he had lived, the house that he had, in effect, never left? He roamed through the countryside near the old family farmhouse calling out loudly after his dog, Guerriero. He waited in vain for a barking reply. The dog had not waited for him. He took many pictures, as though he might reconstruct, once back in Toronto, what had happened to the village. He left after only two days. His world was elsewhere. He felt like a man who had lost his shadow.

HOW TO TRAVEL ALBERTA 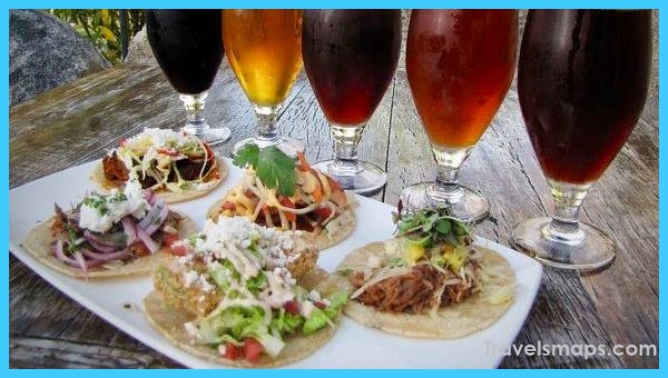 Great Taco And Beer Pairings (I Lovetacos And Beer)