Interpreting Scotland’s earliest castles is a task that has long required great leaps of imagination. With only earthen mounds left behind, they rarely elicit the sense of awe that later stonebuilt castles, icons inseparable from the international perception of Scotland, do. Even the best preserved of them, such as the great earthwork rising up at the confluence of the rivers Don and Urie known as the Bass of Inverurie, go relatively unregarded. Historical reconstruction artist Bob Marshall is using the latest in computer 3D modelling technology to envision Scotland’s early castles in their longlost grandeur. Like countless others, Bob passed by the Bass of Inverurie many times without knowing that it is, in fact, one of the country’s most significant early castellated sites. ‘Castles to me, when I was young,’ he says, ‘were grand, evocative places like Crathes, Craigievar and Dunnottar.’


His project on the Bass of Inverurie seeks to stimulate greater interest in the Bass and similarly overlooked yet fascinating sites. The Bass of Inverurie is broadly identifiable as a motte-and-bailey castle. However, while researching the site, several factors emerged that complicate this seemingly straightforward designation. Perhaps most significantly, there is no direct evidence for (or against) the existence of a timber tower atop the motte, with a single-storey hall of the type seen in the reconstructed bailey being a distinct possibility. Muddling the picture further is the fact that the ditch between the motte and the bailey was carved out in the 19th century, transforming the apparent relationship between the two mounds. What can be said with relative certainty is that both the motte and the bailey were defended by timber palisades with a ditch surrounding the entire site.

The specific position of the entrance gate and buildings within the bailey is somewhat conjectural. If one wanted to make a statement to visitors about precisely who was in charge, having them skirt around the motte and enter via the bailey would have been an effective demonstration. For now, archaeological and documentary evidence is simply too sparse to be more specific. The recreation you see grapples with this ambiguity by presenting a layout consistent with other motte-and-bailey sites adjusted for the scale of the Bass, as well as by incorporating the discovery of an oaken gangway up the motte’s south side in 1883. The Bass and burgh of Inverurie were developed under David, earl of Huntingdon, brother of Malcolm IV and grandson of David I, in the late 1100s. In addition to the earldom of Huntingdon and English estates including Fotheringay Castle, David took the Scottish title Earl of Garioch.

Given David’s royal connections and experience of far mightier stone castles while on crusade with Richard I, the Bass of Inverurie can be viewed in the context of a concerted programme of castle-building and feudalisation in Scottish regions on the fringes of royal authority. Earl David’s son, John, inherited the earldom and when he died in 1237 the lands of Garioch were divided amongst three heiresses. Inverurie passed to John’s sister, Isobel, who married Robert Bruce, 4th lord of Annandale and greatgrandfather of King Robert I. The castle’s constables were the Leslies, whose original surname, de Lesselyns, derived from the Aberdeenshire lands granted to them by Malcolm III. It is very likely, however, that they chose to reside at the nearby moated castle of Caskieben rather than at the Bass itself, as the latter provided more spacious and comfortable accommodation.

Three successive Leslies held the position of constable until 1282, by which point they were no longer representatives of the earls of Garioch. At the end of the 13th century all mentions of the castle disappear from the record. In 1296 Edward I marched his troops through Garioch, and while the Bass would have made for an attractive military target there is no mention of any attempt on it. Perhaps it did not pose enough of a threat to Edward to merit an expedition. A popular claim is that Robert the Bruce rested at the Bass after taking ill before the battle of Inverurie, also known as the battle of Barra. It is every bit as likely, however, that he did so at Caskieben or amongst his army encamped at Oldmeldrum. Whatever the case, the castle was likely destroyed around the time of the battle and was not rebuilt afterwards.

The lifespan of the Bass of Inverurie was thus relatively short, beginning in the late 12th century and concluding in the early 14th century. One of the major priorities of the reconstruction is to situate the Bass within its landscape as accurately as possible. Several sources were consulted to achieve this, including modern Ordnance Survey map data, a 1999 survey conducted to locate the position of the medieval burgh and the descriptions given by Reverend John Davidson, published in 1878. Using these sources a 3D digital model of the landscape was created, extending to 16km squared and depicting the burgh as being divided into thin strips of land called ruids (roods), an Anglo-Saxon term equivalent to one quarter of an acre.

The position of the confiuence of the rivers Don and Urie has also shifted, with excavations suggesting a 12th-century position some 300 metres upstream from their present union. The Bass, and indeed every Scottish castle, can The moated castle as it might have appeared in the 12th century only be truly appreciated in the context of its environment, so visualising the historic landscape is just as important as reimagining the fortification itself. This reconstruction is also a first step in a collaborative project between Bob Marshall and myself to produce a highly visual book on Scottish castles, with a focus on the 11th through to the 13th centuries. Other candidates for reconstruction include sites such as Duffus Castle in Moray and Dundonald Castle in Ayrshire. We therefore welcome feedback on this project and hope that it encourages more people to investigate and explore Scotland’s fascinating early castles. Special thanks to author and consultant Simon Forder for historical input on the history of the Bass. David Weinczok is a writer, presenter, heritage consultant and Fellow of the Society of Antiquaries of Scotland. Bob Marshall is a graphics artist and multi-media designer. He has produced artwork for Historic Environment Scotland, English Heritage and the Royal Collection Trust. 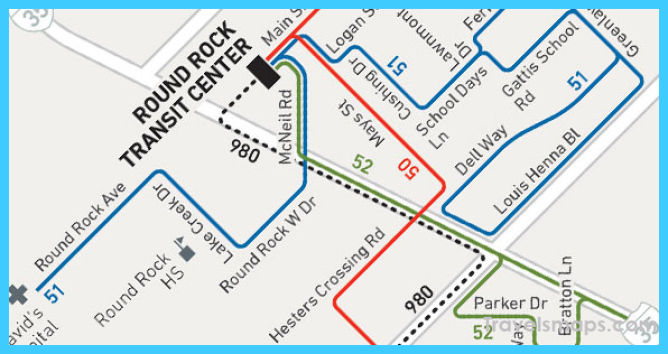